Real excited to get back at it. Drove up Thursday, got unpacked and settled in for a fun weekend of racing.  Friday practice went off without a hitch. I got reacquainted with the CMP GSXR600 and was feeling like 17’s were coming this weekend. Nice day of practice led into an evening of bench racing and grilling in the comfort of club CMP.

After hulk smashing myself into the asphalt last round, my only goal for this race was to get back on and finish. I was a little softer on the brakes and throttle out of principle. Uneventful race, both rider and bike returned to the garage in one piece – mission accomplished.

This round we welcomed #508 Savvas (Sav) Kosmidis to CMP racing. Sav joins us with large goals and a great attitude. Just the kind of guy we like around the CMP garage. With every Sav, 1 free Panos (friend of Sav) is thrown in at no additional cost. In CMP tradition, Tanya and I took Sav (and Panos, last time I mention – just assume he’s there) out to dinner. Sav ran through a 30oz porterhouse like it was a joke. Welcome Sav, bike looks great and we’re excited to have you onboard.

END_OF_DOCUMENT_TOKEN_TO_BE_REPLACED

I went into Round 5 with a lot of excitement and a lot to look forward to. Since Round 4, I had committed myself to getting more seat time on my dirt bike and on the flat track, I was ready for the work (and fun!) to start paying dividends. I arrived Friday around lunch time to find Chris Dove #123 and new teammate #508 Savvas Kosmidis enjoying their practice day thoroughly. Savvas’s bike had just returned from TSS Graphics and looked absolutely amazing! Seems like everything TSS touches right now turns to gold! After unloading and setting up, we all enjoyed a nice relaxing evening at Club CMP.

Saturday morning starts early for middleweight amateurs. We have first practice group so that means tire warmers on at 7:00 and an unhealthy dose of caffeine to get moving. I went out and had a good practice session, but upon pitting in, I was notified by the track marshal my bike was smoking. After getting the bike into the CMP garage, I discovered it was simply a slow drip out of my oil filter. Unfortunately, the change cost me a bit too much time and I missed second practice session.

I look forward to this race more than anything else in the weekend. The challenge of remaining consistent for 25 minutes of racing is a difficult one that not a lot of riders can achieve. I had a bad start and ended up near the back of the field; however, on the 2nd lap there was a red flag crash that sent us back to pregrid. On my second go around, I got a very nice start and found myself towards the front of the Amateur GTO field. I battled with a lot of different riders and, with about 5 minutes left, I was in 5th and running an excellent race.

-This is where things went south-

END_OF_DOCUMENT_TOKEN_TO_BE_REPLACED 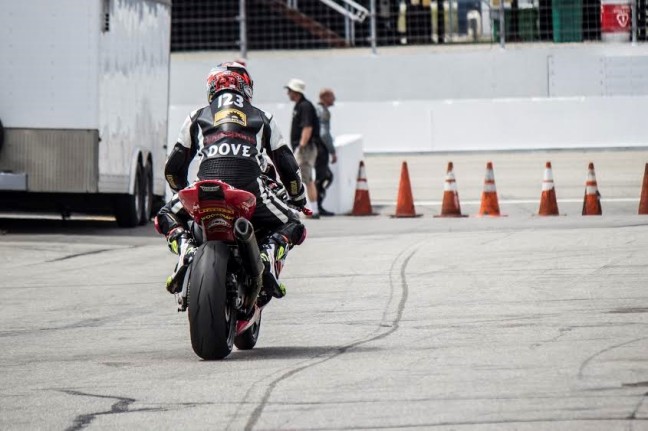 Great day of practice. Clutch on the KTM needs to be replaced, but it’s not shot yet. GSXR needs fresh tires, we’ll sort that out Friday night. KTM tires are going off but should be fine for a race or two on Saturday, we’ll sort that one out Saturday night.

My only goal this race was to warm up the rider and bike. I planned on taking it easy and getting my focus for the weekend dialed in. Halfway through the race, I started to push a bit and exiting t2 I had a massive rear slide. The rear stepped out to full lock and I found myself pointed at t2’s wall. Stayed on the throttle and it snapped back. We wiggled our way back onto the race line and kept on keeping on. Dialed it back a bit and brought it home in 7th. Biggest slide I’ve saved to date.

END_OF_DOCUMENT_TOKEN_TO_BE_REPLACED

What Makes the Honda Grom a Great Motorcycle?

There is no denying that the Honda Grom is a blast to ride. This small motorcycle is lightweight, but powerful enough for any level of rider to have a lot of fun whipping around on one. At only 125cc’s, it is also much less intimidating to a beginner rider than other models in Honda’s line-up.

END_OF_DOCUMENT_TOKEN_TO_BE_REPLACED

I rolled in late Wednesday stoked to be back home at the racetrack! Duncan Wood (CMP #910) and I (Chris Dove #123) were the very first over excited racers on the scene at Loudon Raceway.

Thursday practice –
My first time on a race motorcycle since the last round of racing in October, 2014. Here’s where it gets sketchy. The weather was poor. Cold, windy and no sunshine. I did some in depth weather investigation for the weekend (weatherbug) and concluded this situation would not improve. I made the decision to focus my practice time on the smallest, easiest to handle bike I had with me so that I’d give myself the best chance for success over the weekend. Practice went great, bike and rider both shook off the cobwebs. I figured while everyone else was struggling with big hp and no traction, I’d just roll on around them with 60hp. I was wrong…

Saturday, race 3 – EX Super Singles – KTM did not start (DNS)
Head out for the sighting lap and realize halfway through the lap, my engine is losing compression. This is bad, really bad. The bike worked great all practice on Thursday. At the very last turn before the front straight (starting grids) I went left instead of right. Left goes back to the pits and means your race is done. Making that decision stinks, no way around it. Hopefully you never have to.

END_OF_DOCUMENT_TOKEN_TO_BE_REPLACED

What a weekend! Getting the bike ready came down to the wire and I ended up opting out of installing my new bodywork. #123 Chris Dove and I packed up his box truck and my trailer on Tuesday night and headed up to NHMS on Wednesday afternoon, we were joined at the track by #112 Clayson Baker. The original plan was to do Thursday and Friday practice to shake the dust off. I got on the bike Thursday for the afternoon session and promptly threw it down in 1A. No damage really other than replacing a foot peg and lever guard.  I felt horrible on the bike. Absolutely terrible. Super heavy on the bars, not engaging my legs, drastically exaggerating body position – none of these are good things. I decided to skip Friday practice, save the $150, as the conditions were basically the same as the day before. CMP also had 2 riders in Basic school so Chris, Clay, and I spent the day assisting them and watching them on track.

Two new CMP riders, GM Gary Pescatore and mechanic Jimmy Alessandrini, had a great day in Basic Rider School. It’s a chore for any new racer; seven 20 minute track sessions with all of your off track time occupied in the classroom. It’s a grind. There’s a lot of new information, a lot of stress, but it’s an awful lot of fun. The boys did awesome, both of them making it through the difficult conditions and passing rider school. The CMP garage pulled together and kept their bikes prepped for their track sessions and hopefully helped with good advice and positive words.

Saturday practice 1 for Group 1 was cold, I went out and just tried to work on engaging my legs and ease up on the bars. Ran a 1:39 in practice, probably should have used an hour glass for timing instead of a transponder. Not much changed in practice 2, but I started feeling a bit more comfortable.

END_OF_DOCUMENT_TOKEN_TO_BE_REPLACED

Despite New England’s fair share of snow this winter, we like to look ahead at the warm days of summer and hope that you equally look forward to another great year for the Misselwood Concours d’Elegance.

Spectators and enthusiasts can expect a wide range of participating vehicles, such as this award winning 1958 Austin Healey Sprite Race car, which took part at the AACA regional and national races in ‘63, and became Division Champion at the ‘64 SCCA. Fully restored to its original Lime Rock appearance, the car has been featured at the Greenwich Concours in 2005 and will make its first appearance at the Misselwood Concours.

Over the past five years, we featured many stunning automobiles and motorcycles. For 2015 a steady stream of strong applications makes us feel that this will be the best year to date, with various award winning vehicles that have been showed at other noteworthy shows such as the Hilton Head Concours, the Elegance at Hershey and the Amelia Island Concours d’Elegance.

END_OF_DOCUMENT_TOKEN_TO_BE_REPLACED

Known as the California Hot Rod, this Cycle Magazine Ducati 750SS, a Daytona winner built by Phil Schilling and Cook Neilson, is now up for sale on eBay. Yours for $1 million!

And you can own it if you’re willing to hit the Buy It Now button on eBay, provided you’re approved to spend $1 million. All the better if you don’t need any approval. Bidding pushed past $100,000 on the first day, and, as of this writing, it was knocking on $130K.

Is the bike worth it? Well, there is no other Ducati, perhaps no other motorcycle, that was both so successfully campaigned and so thoroughly and expertly developed while also being nearly molecularly documented publicly in the immortal pages of Cycle magazine. How “original” does this bike remain, and what exactly does “original” mean on a racer like this?